Please read the following documents, written by Alistair Godfrey, which relate to the proposed quarry at Glenquey:

Glenquey is a delightful area located high up in the Ochils between Dollar and Glendevon. An old drove road runs through the glen which is surrounded by Innerdownie, White Wisp, Auchlinsky and Common Edge hills and the drove road is part of Perth and Kinross Council’s core path network and forms part of the Mary Queen of Scots Way.  Much of the glen is now owned by Woodland Trust Scotland (WTS) and has seen the planting of many broadleaf trees over the last 10 years. It is estimated that well in excess of 10,000 people visit the glen every year.

A fascinating feature of Glenquey is the Glenquey Moss – an active Blanket bog (or perhaps a Raised bog – this is still being debated!). There are numerous bogs in the Ochils, but this is the only active one!  As such it is a significant carbon store.

Glenquey Moss is very interesting from a biodiversity perspective and an extremely interesting range of plant communities has been identified and documented.

For example, it is the only site with remains of a type of vegetation that was once extensive in the area, two unusual insects for the area have been found, as have important bird species (Short Eared Owls, Snipe, Sand Martins, Curlews, Singing Larks, Meadow Pits, Lapwings, Swallows and Kestrels, to name just a few), a delphacid plant hopper called Paraliburnia clypealis, which is rare in Britain, and a Red Data Book species has also been found. A recent sampling of the site also revealed one rare and a few uncommon spiders, badgers live here and a recent consultation by WTS revealed Black Grouse have been recorded nearby.

The geological feature supporting the bog is central and fundamental to the understanding  of the processes of de-glaciation that were at work in the Ochils at the end of the last Ice Age and important within the Scottish context. 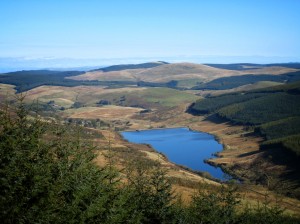 View from White Wisp looking down onto Glenquey Reservoir and Glenquey Moss, just beyond the reservoir! Hardly the location for a quarry!

Despite all of the above, back in the early 1960’s planning permission was granted for the winning and working of sand and gravel from Glenquey Moss and this permission has been renewed continuously since then. In December 2010 Cemex, the current owners of the site, applied for the renewal of the planning permission which was due to expire in February 2011. Perth and Kinross Council (PKC) Development Management Committee (DMC) are considering the application. The target date for making a decision was April 2011 and at their meeting in March 2011 the DMC deferred a decision as they required further information.

A sand and gravel quarry in Glenquey on Glenquey Moss is completely inappropriate.  A quarry will destroy a unique geological structure, a rich and varied habitat, an area of great beauty and recreational amenity, and put an unacceptable number of HGV’s onto roads that are simply not capable of handling such traffic safely!

Friends of The Ochils are working hard to ensure the PKC DMC decides against this renewal. The DMC meets monthly to consider planning applications and we are keen to ensure to ensure as many people as possible attend the meeting when the quarry will be decided.  If you would like to receive regular email updates on the fight against the quarry please let Malcolm know.